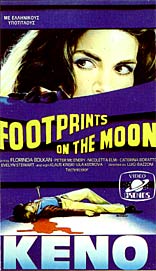 choice dialogue:
"You seem to be off somewhere in space."

Peter McEnry hits the nail on the head

It’s ironic that Luigi Bazzoni is more commonly known for THE FIFTH CORD (1971) than for this subtle masterpiece. And it only goes to show that more often than not the "wrong" films are reissued on VHS and DVD While this title might take a little effort, and possibly money to track down, it’s well worth it. I’m not knocking THE FIFTH CORD but it pales in significance to FOOTPRINTS in almost every way. Even the photography, just as in THE FIFTH CORD by Academy award winner Vittorio Storaro, is bettered in FOOTPRINTS.

But it does not seem fair to compare the two, both very interesting films but FOOTPRINTS goes far beyond the standard gialli formula.

In FOOTPRINTS the ever excellent Florinda Bolkan portrays Alice, a young translator who wakes up one morning after a haunting nightmare where an astronaut is left behind on the moon as the lunar lander slowly blasts off towards earth. A horrible dream of course, but is it just a dream? As the day progresses she finds out that she has been asleep for three days, or has she really? She finds a postcard in her apartment which leads her to the Turkish isle of Garma and to a mysterious look a like, or is it a look a like? Nothing in the film is really what it seems and as Alice trace the events of the last few days it’s becoming increasingly clear that a fatal disaster will strike at any time, if it hasn't already!

FOOTPRINTS is really a film open for interpretation, and it opens up a whole barrel of thematics. Mostly regarding schizophrenia and paranoia, like many gialli, but also about the predestine and the subconscious. This gives it a depth and multi layered edge which makes it stand apart from many of it’s peers. Actually at one point it led my thoughts to the ancient Greek tragedy of King Oedipus where the king does everything to avoid the prophesy of the gods and yet every step he takes brings him closer to his destiny.

It could be argued that the strength of the film is possibly also the weakness of it. You could say it’s a bit too open for interpretation, or blends genres a bit too frivolously. But as there are so many films in the other end of the spectra, which slavishly follows genre conventions I must say I found FOOTPRINTS something of a revelation. Though one can’t help but wonder for what kind of audience Bazzoni had in mind, as fatalism and fear of loneliness is just as much at the heart of this almost Freudian psychological thriller as murder and mystery. Shot at a time when many gialli ventured into sleaze or excess of gore this is almost a gentle film. But as gentle as the stranglehold it puts on the viewer might seem, it’s still a stranglehold and it’s grip tightens at every turn of events. In that sense it is reminiscent of Franscesco Barilli’s masterful THE PERFUME OF THE LADY IN BLACK (1974).

The intricate web of clues (or footprints if you like - yes, pun intended) leading up to the unavoidable climax is a wonder to behold. Granted it is a very slow paced film, but the stillness only emphasise the isolation of Alice and enhance the surreal quality of the film. And granted the film relies heavily on it’s ability to awake empathy for Florinda Bolkan’s character. But as always with a well constructed thriller which builds on emotionalism, fear and pity goes hand in hand. And as tables turn on both Alice and the audience in that typical giallo way the sheer confusion turns downright nightmarish.