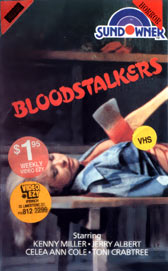 BLOODSTALKERS
(1979,US)
(aka THE NIGHT DANIEL DIED)

"The peaceful, foggy, tropical dawn betrays only the slightest hint of the sheer terror that awaits two couples heading for a restful vacation in a cabin set deep in the picturesque Florida Everglades.

It becomes a screaming, bloody nightmare.

They should heed the warning of the old swamp rat, kerwin ... "That's Bloodstalker Country ... nobody can survive out there overnight!."

choice dialogue:
"You're on the road to hell!"

Making a change from the usual truckload of teens heading off into the wilderness to, unbeknownst to them, meet their brutal maker BLOODSTALKERS sees four thirty/forty-somethings driving through the early morning mist towards the swamplands of Florida. Mike (Jerry Albert), the gung-ho driver whose backwoods family cabin they're heading to tries to enthuse his companions with the idea of getting back to nature, "You're in for a lot of surprises!", he says good-naturedly. His blonde, Ilsa coiffured wife, Kim (Toni Crabtree), doesn't seem so keen and moans continuously, provoking a "Quit your bitchin'!" from Mike. In the backseat, entrepreneur, Danny (Ken Miller - obviously trying to play someone 20 years his junior) and his bouffant haired, bosomy burlesque dancer wife, Jeri (Celea Ann Cole), sit back and pretty much keep scthum.

Mike hasn't been to the cabin for years so stops off a redneck town en-route and asks directions from a particularly bumpkin'esque local who gives him a less than warm welcome: "Boy, you get back in your gas hog and get the hell out of here!", spits the weaselly old coot. Mike presses him further as to why he should leave. "That's bloodstalker country", the local spits back, "... that's a bad place to be, day or night ...", and pausing for dramatic effect, "... especially night.".

Things go from bad to worse when a trio of bearded hillbillies (including one Englishman!?) turn up and start leering at the women and acting in a generally intimidating manner. Getting the idea Mike heads out of town, but not back the way he came, continuing on his quest for the cabin; passing a sign which further cements the local's attitude to hospitality, "No trespassers. Survivors persecuted.".

Eventually, they spot the overgrown entrance to the dirt track which leads to the cabin. Unable to get the car up the track they leave it at the entrance and take the supplies with them. However, when they get there Kim thinks she sees someone skulking around inside, but when they do get inside they find nothing but dustballs and spider's webs. It's hardly the lap of luxury and Kim bitches, "This place looks like it breeds snakes, mosquitoes and dingbats!", before, eventually, mucking in. Mike heads back to the car to pick up the last of the supplies only to find that someone (or something) has throw what looks like shit all over it; he then hears the shrieking of what he takes to be wild cats.

Despite fears about the wildlife, come nightfall Kim and Mike skinny dip in the local lake but return to the cabin when they get spooked, but are unaware of a shadowy figure stalking them and then moving silently through the water towards them. Later, back at the cabin, as Danny climbs the stairs to explore the darkened attic, a furry, black arm punches through the wall and grabs Jeri by the throat ...

Nothing in BLOODSTALKERS is what it seems. Not least of all the fact that it was shot in 1975 (but not released till 1979), which kinda explains Kim's Ilsa pudding bowl hairdo and Danny's far-out Brady Bunch flares. It also goes some way to explain why it doesn't ape 1978's HALLOWEEN. That's not to say that it doesn't borrow liberally from a number of key genre movies - not least of all NIGHT OF THE LIVING DEAD (the group (one of whom lapses into a near catatonic stupor, naturally) find themselves under siege from unseen attackers), and DELIVERANCE (the nasty straw chewin' locals figure further in the story, unsurprisingly), as well as STRAW DOGS - and the twists at the end are pure SCOOBY DOO (not to mention the 'beast' makes a sound almost exactly like the titular hound at one point).

Sadly, the budget didn't seem to stretch to adequate lighting for the night scenes, which is something of a problem considering most of the second half of the film takes place under the not so silvery moon. There are long tedious stretches, during what should be tense scenes, when all the viewer has to keep them entertained is a rather funky soundtrack as they try to work out which shadow is which in the inky blackness. However, the film does transcend its limitations occasionally, most notably during a climactic scene when footage of a rapturous gospel choir is intercut with a mad dash to safety, for one character, and the eerily spooky demise of several others, as they realise that something has got into the cabin.

It's also worth sticking with the film till the bitter end when, during the closing 15 minutes, or so, there's a spate of gorehound pleasingly graphic violence as bodies are found with axes imbedded in them and throats are bloodily impaled on sharp implements.

A perfectly watchable and occasionally diverting low budget piece of trashorama (I can imagine this would have been the kind of thing Southern drive-ins would have thrived on) BLOODSTALKERS isn't really a slasher flick, as such, but it liberally borrows from the subgenre as it weaves its way to a suitably shaggy-dog conclusion.