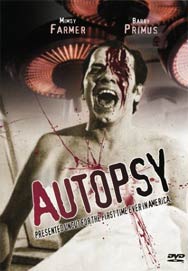 (back of video blurb):

"When the city of Rome is rocked by a wave of violent suicides a young forensic pathologist (Mimsy Farmer), wracked by hallucinations of the living dead, and a priest (Barry Primus), running from his dark past, begin an investigation. Together they uncover a deadly secret and a chilling slab of unspeakable horror."

Rome, Rome - Glorious Rome. I've never been there and surprisingly enough I've wanted to go for quite some time, I say surprisingly bearing all the Gialli I've seen in mind. Although the genre is far from portraying the finest, or even the average inhibitors I feel an urge to see the city, and country, that has inspired this my favourite genre. After seeing MACCHIE SOLARIE the feeling was probably stronger than ever. Of course the theme of the film is far from glossy travel catalogue stuff but never the less the feeling prevails as its impossible to ignore the sheer beauty of the city that serves as a sun drenched backdrop to this harsh story.

Maybe its just a symptom of an unhealthy rate of morbid curiosity, but I don't think so. For in MACCHIE SOLARIE director of photography Carlo Carlini captures the mystique of the old city more effectively than even genius Vittorio Storaro in the equally visual THE FIFTH CORD (1971) or THE BIRD WITH THE CRYSTAL PLUMAGE (1969) and actually emphasises its beauty in a more vivid way.

MACCHIE SOLARIE (translates to 'Evil Sun' if I'm not mistaken) is definitely something of a masterpiece in thriller cinema. (Available on an impeccable DVD release under the name AUTOPSY by the gentlemen at Anchor Bay Entertainment.) There is so much going on in this compelling mystery I find it hard to know where to begin. And even though Crispino uses every cliché of the Giallo genre, short only of the black gloves and straight razor, the film exceeds its limitations on sheer proficiency.

The complex story revolves around a series of bizarre suicides during a heat wave in an eerily deserted August-Rome. Young forensic pathologist Simona (Mimsy Farmer) finds herself thrown into the action when her rich father's social life and her own work suddenly collides. An unsettling event of course when you are working at the morgue on a study of staged suicides. Furthermore she is suffering from a horrible hallucinations in which the corpses at the morgue comes to life to haunt her or just fornicate amongst themselves. A would be sleazy affair of course. But Crispino got a firm hand on the direction, and never really slips. Some feat when the character gallery includes both a medico-legal examiner with necrophile tendencies, a leering care taker who does his best to catch a glimpse of Mimsy's knickers and a 'loving' boyfriend who seduces using a pornographic slide show. Add to that the fact that Mimsy throws her clothes off at a quite regular basis, and at one time even imagine herself having it off with a catholic priest. All this of course should add up to major sleaze and possibly cheese. But as I said Crispino never loses the grip on the story. And after the film is over and all the pieces of the puzzle have fallen into place (okay, not ALL, this is an Italian murder mystery after all) you are left with the feeling that you've actually watched one of the most classy excursions into Giallo land. With amazing settings, gorgeous camera work, an excellent soundtrack by Ennio Morricone, fine actors and a multifaceted script which ties together beautifully in the last 15 minutes. All this in a skillfully built, almost claustrophobic, heat wave atmosphere.

The only downside - and I feel a bit carping in bringing this up - is the fact that the film does come across a bit confused. And if you are not a die hard fan the Giallo formula this could probably be quite frustrating as you don't have a clue as to what the hell is REALLY going on until the very end. Carping as I said. For just as when I first saw Francessco Barilli's THE PERFUME OF THE LADY IN BLACK (which MACCHIE SOLARI slightly resembles in tone) I must admit I had a great time trying to figure out different solutions of my own to the intriguing riddle.

1) Female cuts her wrists
2) Male drowns himself
3) Male blows himself up
4,5,6) Male shooting himself with a machine gun (on screen) after killing
his two children (not shown)
7) Female found shot
8) Male found hanged
9) Male pushed from balcony - later dies at hospital
10) Male falls to his death